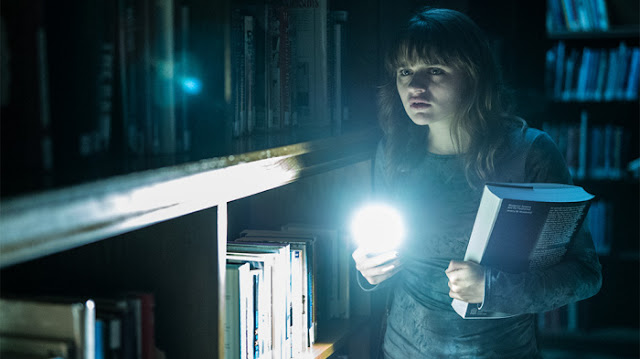 Slender Man was all the Internet rage back in the 2000s, starting as a Creepypasta and exploding into fan fiction and online lore. So it was only a matter of time until someone made a movie about him/it.

The only reason I bothered to watch 2018's Slender Man is because my son, who was seven at the time, and his friends were all about Slender Man. He is featured in Roblox games, and was the talk of the elementary school playground.

He's since been usurped by Siren Head, another online ghoul.

I wanted to see what Hollywood would do with such a creation. And I was intrigued by the real-life stabbing the character inspired, which is documented brilliantly in the HBO film Beware the Slenderman.

Sylvain White's flick is basic big-studio horror, rich in atmosphere and well shot, but not all that scary. It features a pretty, young cast that includes Joey King, Julia Goldani Telles and Jaz Sinclair, and is about a group of friends who summon Slender Man, with expected results. He wants to take them back to wherever the hell it is he comes from.

This is PG-13 gateway horror that, from what I heard, was heavily edited by the studio to appeal to as young -- and broad -- an audience as possible. So no blood and guts, tame horror, and barely enough of a story to make much sense. And, because this came out in the 2010s, no exploitive elements whatsoever.

Yet I've caught myself watching Slender Man three times now. THREE TIMES! And it's not even that good. But there's a good movie in here, and I keep looking for where the studio tampered with it, and wonder what could've been. I like the cast, and Slender Man has such potential for a good horror movie.

White knows how to shoot a movie, and also knows not to show too much of your monster, which makes the moments Slender Man appears on screen more effective... even if he doesn't do a lot.

Yup, a Guilty Pleasure if ever there was one, even if I'm baffled as to why.