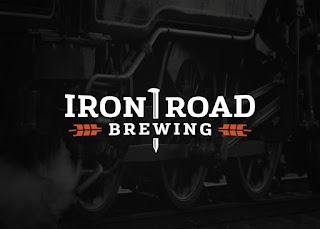 When I think of Fridays, I think of how, often late at night, the soft sound of the train whistle can be heard as I sleep.  A soothing, relaxing sound beckoning me to ride that iron road to explore new lands... and new beers... 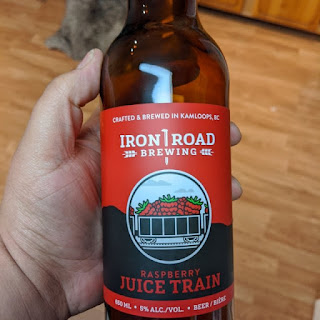 The label for Iron Road Brewing's Raspberry Juice Train is bold in colour, but simple in design.  The ragged black and red background catches your eye, white the central picture draws your focus.  I love the rather whimsical image of a train cart carrying large raspberries.  There is a wonderful balance between the black, red, and white portions, that I find quite appealing. 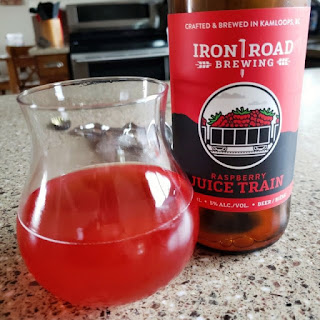 The brew itself has a marvelous raspberry red colour to it that almost fools you into thinking it's actually a fruit punch.  The head of foam isn't much to write about though, as it dissipates fairly quickly.  I liked how the beer's colour almost matched the bold red colour of the label.

This raspberry sour saison has a nice, tart first sip.  I sat up and took notice of the blend of sour, and fruity flavors.  I perked, up and was looking forward to my next sip.  I wasn't disappointed.  Iron Road's brew was consistent in it's tone and flavor from start to end.  I was able to kick back and just relax while sipping away at it.

When I was finished, I reached for a second one... only to realize I'd only bought the one to review.  For one of the few times during this series, I got up and went to the liquor store JUST to buy another bottle.  A beer that is able to inspire me to do that is a "Good".