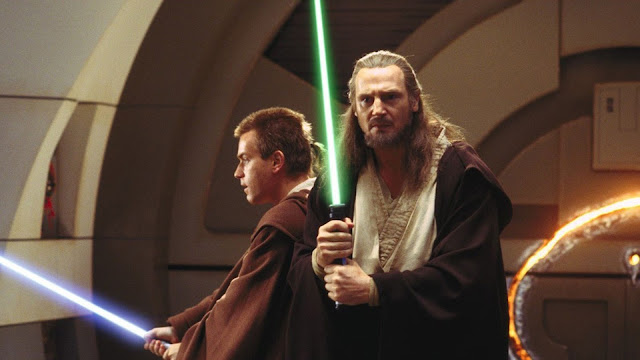 Last week, I finished my journey through the Marvel Cinematic Universe.  This week, I start my travels through another cinematic universe.  The Star Wars Universe...

The planet Naboo is under attack.  Jedi Master Qui-Gon Jinn and his apprentice Obi-Wan Kenobi are sent to negotiate a peace treaty... but things don't go well, and they are forced to flee with Naboo's Queen to a small desert planet as they seek answers to galaxy changing questions.

Who is behind the conflict?  Who is the mysterious enemy trained in the ways of the Force?  How will a young slave boy put them on a path towards the phantom menace?

"Star Wars: Episode One" gets a lot of flack from Star Wars fans.  Since I'm more of a "Star Trek" sort of guy, I can be a bit more impartial in my views.  The story, at it's core isn't bad.  In fact, it makes for a nice space opera.  If there's a flaw with the story and plot, it's more a matter of pacing than anything.  It kinda... waddles like Jabba the Hutt at times.  Also, I must confess, the revelation about the source of the Force was a little disappointing.  Otherwise, the story was pretty darn solid.

The characters involved, however, have a few flaws.  Qui-Gon and Obi-Wan are well crafted- as is Padme.  They are unique, interesting, and flawed in a relatable way.  The Trade Federation Envoys, and the infamous Jar Jar were a little cringey, as there were elements of racial stereotyping in them that were at times wince inducing.  Jar Jar especially.  I'm sorry, but I feel that his character wasn't entirely necessary to the plot's movement, and that he was included in an attempt to appeal to kids.

Anakin Skywalker, as a character in this movie kinda felt hollow to me.  I got the impression that he was more a McGuffin than a fleshed out, living character.  This is a shame, as the character is central to origin of the Skywalker Saga.  Just disappointing over all.

One of the things that gets mentioned a lot, is the stilted acting.  The cast is great- but the acting is a little off for the most part.  Given the amount of CGI used in this movie, I can't really blame the performers for not being able to give us the best they have.  It's hard to create belief in something when all you're acting with is a stick and a giant green room.  There are moments, however where they are able to leap above that limitation, and engage us fully.  Sadly, those moments tended to be the amazing fight scenes.

In the end, I'd have to say that "Star Wars: Episode One" is a decent film hampered by the over use of technological special effects, and a slightly overweight storyline.  I'm going to put it in "The Bad".