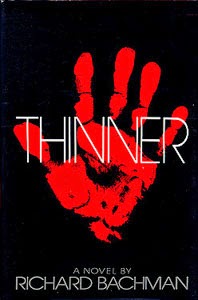 One of the things that horror does, is take something we often WISH for- and make us rethink that wish...

After Bill Halleck accidentally runs over an old gypsy woman, a simple word is whispered to him- and his life becomes a living hell.

This book is one of Stephen King's earlier books, written under the name "Richard Bachman", but isn't what I would consider one of his better novels.

The fault isn't with those things.  Rather, the problem for me lies in the character of Halleck, and the pace of the story.  I had zero sympathy for Halleck, so felt no real tension on his behalf.  Maybe if he had some redeeming qualities, and felt real remorse for what he did, then I might not have minded the slow pacing of the story.  As it was, I wanted it to end.

Somehow, it's appropriate that I've written a "thin" review of Stephen King's "Thinner".  I'm going to put this book in The Ugly.