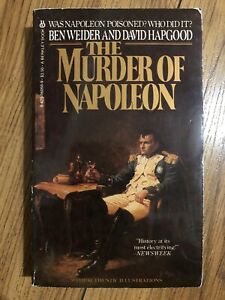 Which is why, this week, I explore Ben Weider and David Hapgood's book, "The Murder of Napoleon"...

For 150 years everyone believed Napoleon died of stomach cancer.  Then a Swedish dentist, Dr. Sten Forshufvud, read an account of Napoleon's last days on St. Helena.  Forshufvud was stunned- the dying emperor displayed all the symptoms of arsenic poisoning.  But could he prove it?  And who had done it?

This is a fascinating book about a fascinating topic- murder... murder most foul.  This book covers Napoleon's final days in exile, the short investigation into his death- and the subsequent ruling that stomach cancer had gotten the better of the emperor.  It then details Dr. Forshufvud's revelation, and his journey to collect the clues and evidence to support his belief that Napoleon had actually been assassinated via poisoning.

The majority of the book reconstructs the days and events leading up to Napoleon's last breath- about two thirds or so, with the final third focusing more on the Dr's investigation.  The case and evidence is present like a classic mystery novel- presenting the events and the clues until the killer is revealed.  The pacing is smooth and transitions from the past to contemporary times seamlessly.  It works your brain, while being entertaining at the same time.

For students of history- especially of the Napoleonic Era, or students of French history and it's leaders, I would absolutely recommend "The Murder of Napoleon".  A "Good" from me.