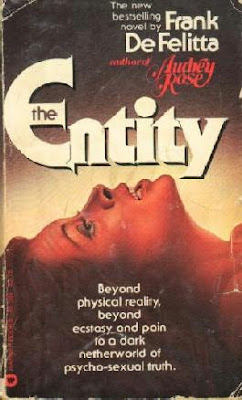 Not too long ago, Jay wrote a review of the 1983 film, "The Entity"- based on Frank De Felitta's book of the same name.

Well, I figured that since I've read the original book, that I would review that this week...

One of the things that horror stories are supposed to do is take the things we take for granted, and use them to make us wonder about how secure our lives really are...

Carlotta Moran is a simple mother trying to raise her two children, and make ends meet.  A single, night of violence by an unseen assailant changes everything in Carlotta's life.  Soon, she won't know what's real, what's imaginary- where it's safe, or where it's dangerous.  Is the terror stalking her every night spawned by demonic forces... or is it something much closer to home?

I'd seen the cover for this book many years ago, and was interested in that fact that it was supposed to have been based on a real case of sexual spectral assault.  At the time I first saw it, I wasn't sure how explicit it was, since I was only about thirteen or so.  Well, after years of being curious about it, I finally got the chance to buy and read it a few months ago.

While, I have some quibbles with one scene in general, I felt the book was quite good.  The story is tightly written, tense without being overpowering, and flows nicely.  I really liked how it flowed from one character to another for parts of the story.  The writing style was also very easy to read, and created well crafted images in my mind.  The only scene I had a problem with was near the end whey they attempt to "capture" the titular Entity.  From my own research into the paranormal, the method they proposed seemed rather far fetched.  Interesting, but farfetched.  I just had problems suspending my disbelief during that scene.

The characters were interesting, if not fully realized.  Carlotta and her psychiatrist are the two most fleshed out characters, while her kids, the neighbours and the parapsychologists are almost window dressing at times.  Even Jerry, Carlotta's boyfriend seemed only be introduced into the story just so he can be removed again.  I still found the parapsychologist interesting though, and likeable.  Dr. Sneidermann, the psychiatrist is both likeable and not likeable.  You can relate to his frustration, and his feelings for Carlotta, but at the same time, you just want to smack him at times.

I would recommend this book to fans of horror novels- though it may make some people a little uncomfortable since the subject matter does deal with rape- even if it's done by a ghost.  I'm putting "The Entity" on the shelf marked, "The Good"