Review: You Should Have Left 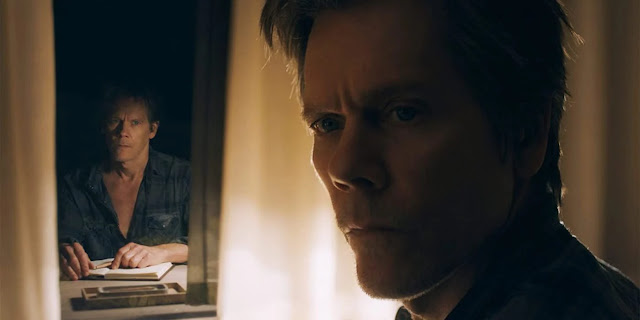 Back in 1999, screenwriter David Koepp partnered with actor Kevin Bacon to make Koepp's directorial debut, Stir of Echoes. The film was lost amidst the horror crazes that were The Blair Witch Project and The Sixth Sense, and didn't receive the recognition many fans believe it deserves.

Not so now. Stir of Echoes is regarded as a modern genre classic, and a damn fine adaptation of Richard Matheson's story. So there was, at least on my part, some serious expectations for the writer/director and star's latest team up, You Should Have Left.

Sadly, what we end up with is a film that's fine while you watch it, but easily forgotten once the credits roll. You Should Have Left is efficiently made and full of atmosphere, but light on scares. In fact, it's not scary at all. And once you figure out what's going on, you're left underwhelmed.

Bacon plays a wealthy banker who is married to a successful, and much younger, actress. The couple, along with their daughter, decide to rent a vacation home in Wales for a family holiday. They quickly discover the house is full of secrets, and their own past is going to come back to haunt them.

Bacon and Seyfried are good, as always, and Koepp builds some effective scenes, but it's all very... tame. This is definitely a studio horror film, one that doesn't want to take too many chances or get too out there. That's too bad, as the plot was ripe for such things.

You Should Have Left is a decent enough time waster, just don't expect much from it. Unlike Stir of Echoes, I won't watch it again, and I doubt anyone will be talking about it 20 years from now. So that makes it a disappointing Bad.