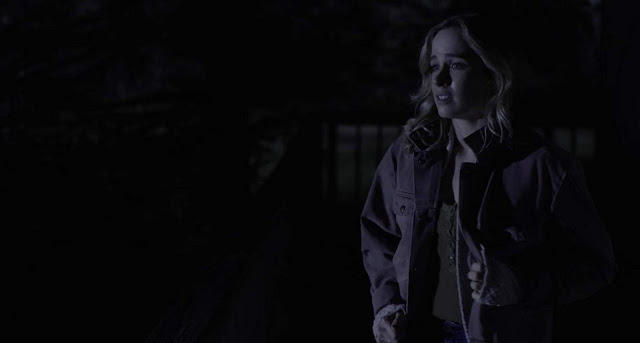 The latest offering from Wild Eye Releasing, The Luring, tries hard to be a scary and mysterious supernatural thriller. And it comes close to succeeding more than a few times. Sadly, it can't quite hit the mark.

The story has potential; a man tries to regain a lost childhood memory by returning to his family's old vacation home, where an unspeakable act took place -- one directly related to his youth.

So yeah; lots that can be done with that. And writer/director Christopher Wells sets up some effective scenes, opening things with a child's death, then adding mysterious characters that may or may not be in our hero, Garrett's, head. And there's a creepy clown on stilts that legit gave me the willies.

And the film ends strong too. Very strong. So good opening and closing, and a few effective chills in between. We're good, right? I said right?

Wrong! The Luring is sunk -- at least for me -- by a truly unlikable lead in Garrett. We see him as a dick child during flashbacks, and he grows into a dick of an adult who treats his girlfriend (well played by the talented Michaela Sprague) like dirt. He's not unlike Jack Nicholson's character in The Shining that way.

So really, it's Garrett who hurts the movie for me. It got so I didn't enjoy any of the scenes where he's on screen. And, without someone to truly root for, or invest in from the get go, I felt disconnected from The Luring for a lot of its running time.

Wells does deliver some good chills and spooky imagery, so I'm giving this one a Bad. Hopefully he'll give us a proper hero next time around.