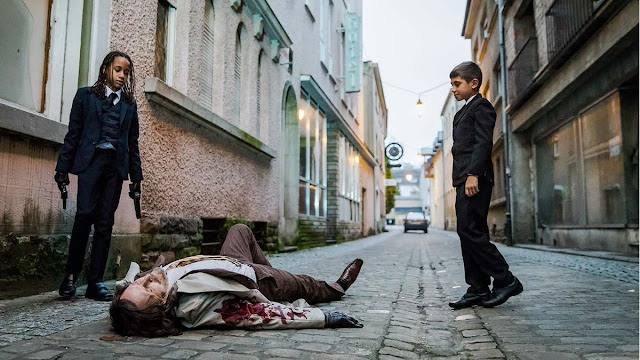 No one in Canada makes movies quite like Bruce McDonald. He dabbles in genre fare, but puts his own unique spin on it. Why? As he said in our interview: the stories have been told, so why not tell them a little differently?

That's my Cliff's Notes version of what he said, by the way.

His latest, Dreamland, is very much an art film disguised as a crime movie. It's got gangsters and hitmen, a morally ambiguous hero who tries to do the right thing, human trafficking... all the makings of a gritty crime tale.

But it also has vampires, takes place in a magical... ish... kingdom, and doesn't make a lot of sense outside the context of the story being told. Oh, and two of the characters look alike, which is a key component to how the story unfolds.

Dreamland is a perfect title for this movie. The whole thing looks, feels and works according to a dream structure. Like I said; it makes perfect sense while watching it. View it as linear, traditional feature film and it doesn't. Your enjoyment hinges on your ability to let go and just take Dreamland in.

I was able to do that, and enjoyed it immensely. This is a great looking ride. Not so much a movie, but an experience. McDonald pulls it off beautifully! And it has one of the best -- and most unexpected -- endings I've seen in a while.

The cast -- which includes McDonald mainstay Stephen McHattie, along with Henry Rollins and Juliette Lewis -- is pitch perfect. I can't remember Lewis ever being this good, and having this much fun. And Tomas Lemarquis is the kookiest vampire I've ever seen. I loved his performance!

Dreamland isn't my usual pint of ale, but I dug it a lot. It's a Good!