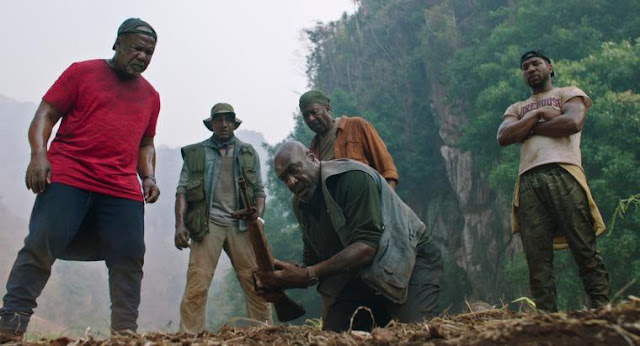 It's a rare thing to watch a movie and realize part way through that it's going to be the flick to beat that year. But that's exactly what happened to me while watching Spike Lee and Netflix's latest, Da 5 Bloods.

Rare is the film that mixes an important messages, and pure entertainment, that doesn't feel preachy, or hit you over the head with it. Spike Lee is one of the few filmmakers who can do that, and he does it brilliantly here.

On the one hand, Da 5 Bloods is about a group of Vietnam Veterans who venture back to their former battlefield in search of a cache of gold and the body of their fallen commander. Along the way they revisit old friendships and rivalries, and explore how the war impacted them when they returned home. This alone is powerful stuff.

Add a layer where all five vets are black, and that brings up a whole level of race relations and how black people were treated by the United States, and still are. Thirty five percent of soldiers who fought in Vietnam were black, but they only make up 18 percent of the American population. That's just one of the hard realities Da 5 Bloods dissects, and it's a small one compared to the others.

This is one hell of a movie, and an important one given what is happening in the U.S. right now. It has a a lot to say about racism, but also about trauma, grief, friendship, parenthood and politics. And it's an exciting adventure story, and heartfelt drama.

Film doesn't get much better than this. Da 5 Bloods is a Good. There won't be any better movie in 2020.