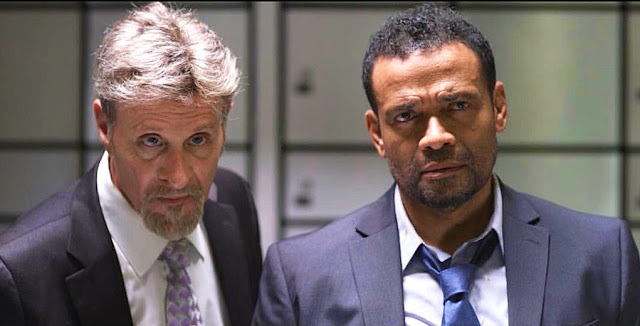 Uncork'd Entertainment's latest action effort is based on a real-life incident, the largest hostage situation in American history, which occurred at a Sacramento electronics store in 1991. This makes it an ambitious project for a distributor best known for low-low-low budget genre releases, usually direct to the home market.

You can't fault them for trying, and Uncork'd and writer/director Nick Leisure give the story their all, even if they don't always hit the mark.

The film's strength lies in a trio of performances led by veterans Mario Van Peebles and Marshal Hilton, a not quite buddy-cop duo who attempt to negotiate with a group of Asian hostage takers. These two own the show, and act circles around pretty much everyone else, holding our attention with some serious gravitas.

For the record, former Basement guest Hilton is the better of the two.

Jessica Meza, a beat copt who aides Van Peebles and Hilton is also good. She has an unneeded, but nevertheless entertaining, minor love interest with Van Peebles.

Everyone else, well, they just aren't as good. In fact the rest of the cast just can't live up to the leads, or the story, which hurts moments of dramatic impact and poignancy. They can't deliver the impact the story needed.

This isn't to say I wasn't engaged by A Clear Shot, as I found myself quite involved in the story. I appreciated how they didn't paint the hostage takers in a completely negative light, and attempted to address issues of race and white privilege. In fact, the ending left me a stunned, which means Leisure nailed it.

A Clear Shot is an ambitious film given its budget and overall casting. I liked it. I enjoyed Van Peebles, Hilton, and Meza. That means it's a Good.