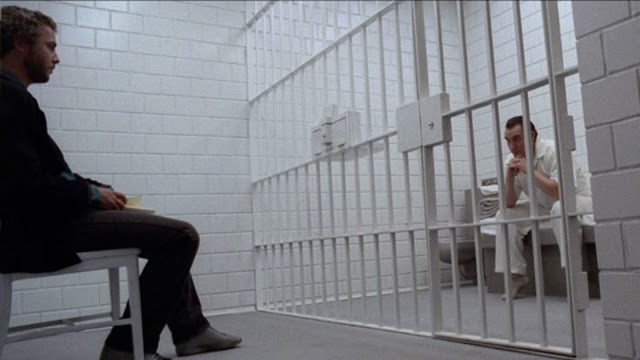 Years before Anthony Hopkins and Jodie Foster made the world of serial killer Hannibal Lecktor viable on the big screen, there was Michael Mann's Manhunter.

The film, which was a box-office bomb in its day, was an adaptation of Thomas Harris's first Lecktor book, Red Dragon. And it came a year after Mann made it big on the small screen with Miami Vice. So what we get is a pretty faithful adaptation of Red Dragon done in the slick, rock-and-roll stylings of Mann's hit TV show.

We also got a very different Lecktor, one who has little screen time -- which accommodates the character's limited involvement in the book -- and is very well played by Brian Cox. In fact, Cox is so effective, it makes me wonder why he wasn't brought back to play the character in The Silence of the Lambs.

Equally good is William Peterson as Will Graham. Peterson is 100 percent believable as a tortured profiler who can't sit by and let innocent people die. He brings the right blend of stoicism and vulnerability you'd expect from a veteran -- and emotionally compromised -- FBI agent.

Graham has been played twice since Manhunter; first by Edward Norton in Red Dragon, then by Hugh Dancy in the TV series Hannibal. Peterson is the best though.

The rest of the film is damn fine. Mann has always been a talented filmmaker, and Manhunter is one of his earlier films, so his skills were already apparent. This is a deft blend of suspense and police procedural, and never boring. And yes, it's uber stylish as well.

If you're in the mood for an 80s style serial-killer yarn, Manhunter is your best bet. It's a Good.