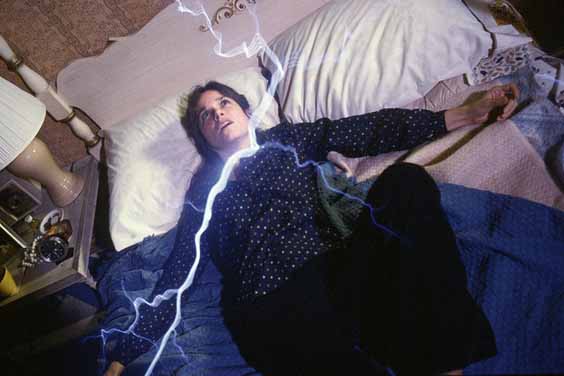 Clearly inspired by Jay Anson's alleged true account of The Amityville Horror, Frank De Felitta's The Entity offered a similar take on a shocking real-life haunting, in this case the repeated spectral rape of a young, single mother.

And, like Anson's book, it was adapted into a feature film featuring A-list stars and a serious tone. No B-movie nonsense here!

The film makes it clear this is a fictionalized account of the tale, so the names and some situations have been changed, including a highly preposterous final act I call total bullshit on. But the rest of Sidney J. Furie's tale takes a pretty serious look at the subject matter.

For one, as much time is spent dealing with the psychological reasons for what is going on. The lead, well played by Barbara Hershey, comes from a troubled childhood filled with trauma and sexual abuse. Are the attacks a trick of her mind? Ron Silver's psychologist seems to think so, and these scenes add much dramatic punch to the story.

But this is a horror film about spectral rape, so we get ample sequences dealing with this. At times they feel exploitive, but there's no easy way around that. They're certainly uncomfortable to watch.

Hershey owns this movie, and I enjoyed her back and forth with Silver. Being a ghost hunter myself, I respected that Furie and company treated the subject of parapsychology with, well, respect. Ditto the battle between it and mainstream science and psychology.

At two hours, The Entity is a little long, but it is certainly entertaining. And yes, it has its freaky moments. It's a Good, and worth the watch.