From Page to Screen: One Shot, AKA Jack Reacher: One Shot 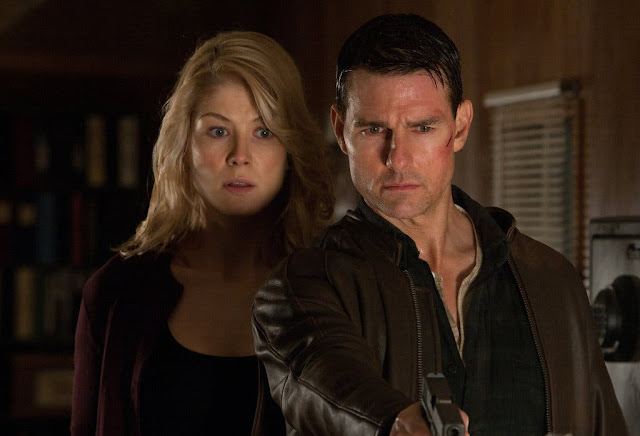 I didn't become familiar with the Jack Reacher character until I heard there was a Jack Reacher movie coming out, and everyone lost their minds because Tom Cruise was cast... and they didn't lose their minds in a good way.

So I read the novel One Shot, which the Jack Reacher movie is based on, then I watched the film. I didn't get the hate for Cruise's casting then, and I still don't. And I've read many Reacher books since.

OK, I do get it a bit. In the books Reacher is like 6'5 and blonde, and built like a tank. Think Dolph Lundgren and you've got Reacher. But Cruise nailed the character, and that's all that mattered to me. He's got the attitude down, the way Reacher thinks and acts, and he kicks ass with the best of them.

Casting aside, Jack Reacher the movie, and One Shot the book, aren't that different. A few characters were jettisoned in order to streamline things a bit, which is often the case in adaptations. The ending is slightly different, with a shootout at a gravel pit concluding the film's story, while the novel ended at a house. A gravel bit is more visually interesting I guess...

The third-act hostage is different as well -- spoiler alert -- but I had no trouble watching Rosamund Pike for a few extra minutes. Sue me.

Otherwise, Jack Reacher remains a pretty faithful adaptation of the source material, and set the stage for a damn fine action franchise... that was killed be a subpar sequel. But that's a story for a different day.