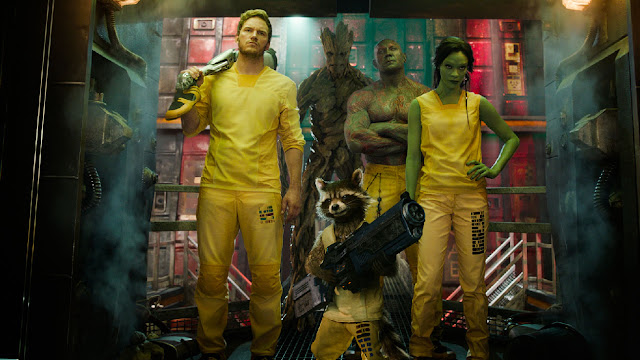 This week's journey into the MCU takes us into space, as a band of misfits come together to guard the galaxy... and discover what family is...

Peter Quill is a space pirate.  Gamora is an assassin.  Rocket and Groot are bounty hunters.  Drax is a man seeking death and revenge.  Their paths all come together as they seek to keep a powerful artifact out of the hands of a power seeking tyrant.

Together, these outcasts and misfits will become the galaxy's last hope for survival...

"Guardians of the Galaxy" has one of the stronger team based storylines in the MCU.  Possibly stronger than the "Avengers" movies.  The threat is cosmic, but the plotlines are very personal and intimate- very character driven rather than action driven.  It moves between humour, action, drama, pathos, and back smoothly while moving you towards the climax.  An enjoyable ride you aren't aware of taking because you're just to involved in the moment.

The characters are great.  Each is unique, and well crafted- with depth of emotion and reality.  They exist wonderfully as individuals and as a team.  There is great chemistry and balance between all of them.  It's hard not to like them, and cheer for them as they go from one adventure to the next on their journey.

The charm and success of these characters are down to the wonderful performances.  Every single member of the cast work great together seamlessly.  I would have to say that the cast of "Guardians of the Galaxy" is more solid in this movie than any other of the MCU- which is quite an accomplishment in my opinion.  By the end of the movie, I couldn't wait to see more of these characters and performers.

This movie had a great visual style to it too.  A fascinating combination of bright, vibrant colours, and dark earth tones.  Each scene popped with life and detail.  While most of the other MCU's went with a more grounded style, "Guardians of the Galaxy" went balls to the wall making itself stand out with it's more comic bookish look and style.  Just amazing and wonderful to see.

"Guardians of the Galaxy" is one of my favorite MCU movies to date.  When I first bought it- I actually watched it three times in a row, because I just enjoyed it that much.  Watch it, own it, watch it again.  A cosmic level "Good".