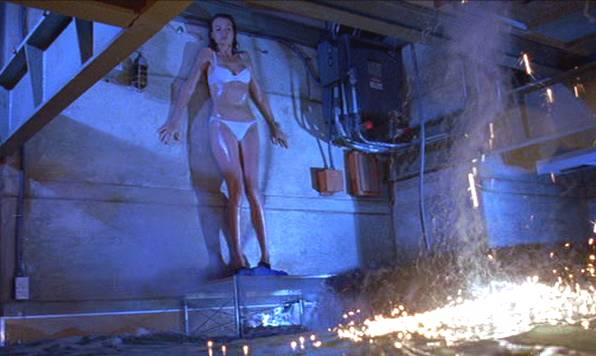 I have a soft spot in my heart for shark movies. For one, I'm fascinated by sharks. Wouldn't want to be on the business end of one seeking a hot meal, but I think they're cool. And they make for great aquatic villains.

Jaws is the king of shark movies, a horror subgenre that became pretty laughable until The Meg made big money during the summer of 2018. But before movies like Sharnado and Two-Headed Shark Attack came along, we had Renny Harlin's Deep Blue Sea in 1999. It was probably the last time Hollywood took the beast seriously for almost 20 years.

Sure, genetically enhanced sharks terrorizing an ocean-based research facility is more The Asylum territory than a serious flick like Jaws, but Deep Blue takes itself more seriously than the idea suggests. Well, serious enough anyway. It's still a B-movie, but made with an A-level budget and solid cast that includes a pre-Punisher Thomas Jane, Samuel L. Jackson and Saffron Burrows.

Although it's not so serious that it doesn't allow the beautiful Ms. Burrows to strip down into her underwear during a crucial shark-attack scene... It is THAT kind of movie (see pic above).

The shark scenes deliver the goods, the effects are late-90s decent, and there's a sense of humour. Deep Blue Sea is slightly better than good-dumb-fun material, and it's the last really good movie Harlin made before falling from grace in the early 2000s. I like to return to it once in awhile, which means it's a Good for sure.