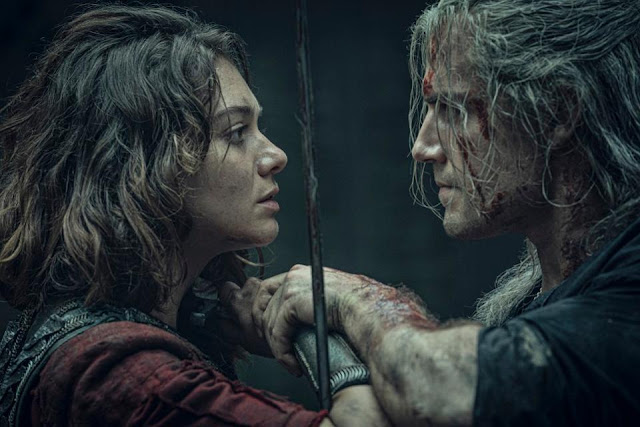 I've only played a portion of one of The Witcher video games, and have never read the Polish novels by Andrzej Sapkowski. I know the books and the games have a huge following, and there was a lot riding on Netflix's adaptation, at least for hard-core fans.

My wife is one of the those, and her and I dug into the series today. She likes it a lot, approves of the changes made, and enjoys Henry Cavill's performance as Geralt, the jaded, sardonic hero at the centre of these stories. If it's good for her, then it's good for me on the level of an adaptation.

But how does it work for a non fan, not that being a fan is any great claim nowadays considering most fans don't seem to like the things they are fans of anymore. But I digress into a future column...

As far as entertaining television goes, The Witcher is a good time. Hell, the first episode features my three favourite Bs: beasts, boobs and blood, so it's great on that level. The episodes aren't overloaded with action, but it's well staged and exciting when it happens. Fantasy stories can be thick with plots, subplots and too many characters. The Witcher has a lot of shit going on, but I was able to keep up. I appreciated that.

From what I gather, all the characters and plot threads from the books and games are here. This is kinda like The Mandalorian, with a continuous story thread bridging episodic tales. If you've read or played them, I'm sure you'll be happy. If you're like me and don't care, the episodes are still enjoyable.

From what I know of the games, Cavill nails the part. He moves, looks, and sounds like Geralt. And he's completely shed his Superman image. The man is an actor, so it's great to see him act.

The Witcher is a solid pre-Christmas binge, and one I'm sure many will enjoy. It's a Good, so grab your broadsword, and a beer, and enjoy.