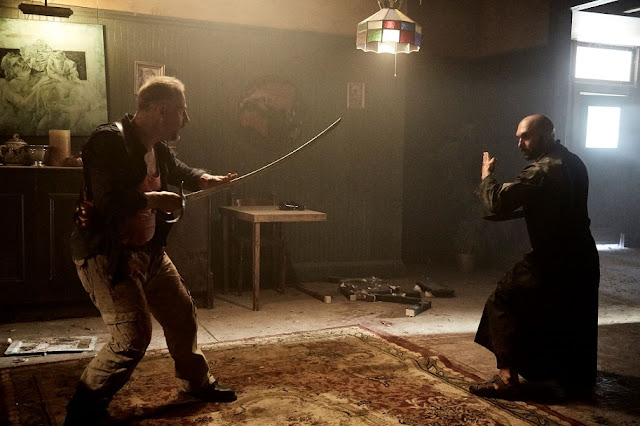 Ladies and Gentleman, you can bring nostalgia into cinema without resurrecting a decades-old franchise. And Jesse V. Johnson's latest action effort, The Mercenary, is proof of that.

This is an old-school action movie that has the look, feel and pulse of 80s action flicks. If it were made back in the day, it would have starred Jean-Claude Van Damme, Chuck Norris or even Steven Seagal. But it was made in 2019 and stars Dominiquie Vandenberg, who himself is an accomplished martial artists, knife fighter and former soldier.

To say Vandenberg brings a level of credibility to the role is an understatement. This man knows how to kill for real, and it's apparent in every fight sequence in the movie. He, Johnson and their fight choreography team create some of the most brutally entertaining action scenes I've ever seen. This should come as no surprise considering Johnson directed Triple Threat, and that film is an action fan's wet dream.

So's this movie! I had a blast with it. The performances, which include work by the great Louis Mandylor and Carmen Argenziano, are spot on. And I dug the overall message that God has a purpose for all of us, even if that purpose involves violence. So don't try to fight it, just be who you need to be.

Sure, there's not much new in The Mercenary, nor does there need to be. This is slam-bang entertainment of the highest order, and I highly recommend it to fans of pure action. It's a Good!

The Mercenary hits DVD and Digital Jan. 7 from Uncork'd Entertainment