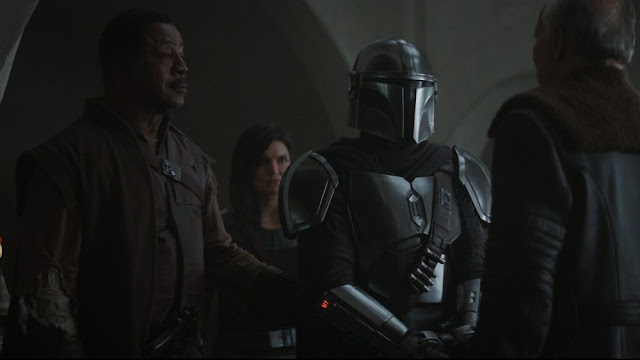 The Mandalorian delivers one of its most intense episodes yet, and sets the stage for what promises to be a corking season finale next week. Suffice to say, if The Rise of Skywalker is drawing lukewarm reviews, this series is sure to please even the most jaded fan.

I want to avoid spoilers as much as possible, but we get a bonafide cliffhanger here, with Mando, Cara Dune and Greef Carga (yup, Carl Weathers is back) trapped in a cantina, and oodles of former Imperials waiting outside, blasters at the ready...

Damn, just spoiled something. But how they get there is pretty damn entertaining. There's plenty of action, solid dialogue (yes, I went there), and everyone's performance is on point (went there again).

See, I can't really say much about this episode without giving anything away. Let's just say those who felt the last few standalone episodes left them a little cold, will be more than pleased. And if you want to be left with bated breath, waiting for Dec. 27 and the season finale to arrive, you will be.

What I can say is we begin to get a real glimpse at how the universe fell apart after Return of the Jedi, and that like all rebellions, things didn't go as smoothly as hoped. End of transmission.

There's a reason The Mandalorian is the most in-demand show on the planet, and this episode re-enforces why. It's damn fine Star Wars, and a great entry in this exceptional series. A Good from me.