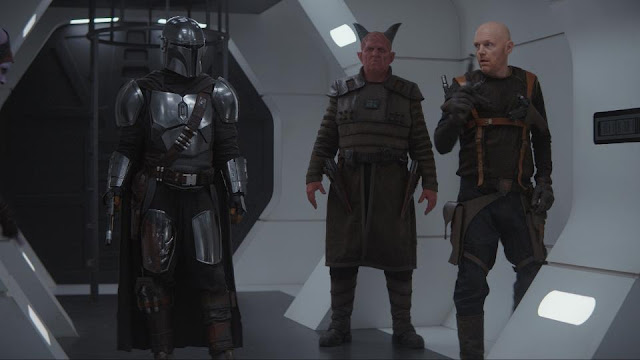 There's something comforting about formula. Sure, it's great to watch genre-bending, rule-breaking television that challenges one's views and makes one think. But sometimes it's nice to dive into the familiar.

The Mandalorian has worked so well on so many levels. It's played within the Star Wars universe, and explored the boundaries of it. It's employed Western and samurai tropes. And it's been entertaining as hell. The show is episodic, but there's an underlying story arc. It's pretty much like The X-Files was during it's heyday; ahead of its time, but right on time.

With the latest episode, The Prisoner, the series dives into the man-on-a-mission genre. Mando signs up with a band of mercenaries hired to rescue a captive from a New Republic prison ship. If you've seen The Dirty Dozen, Kelly's Heroes or even Rogue One, you know what to expect.

At one point, the tables are turned on Mando, and he's pitted agains the very people he's supposed to work alongside. Spoiler alert. But we know things are going to be OK for our hero and his wee sidekick. It's just the ways shows like this work.

In a world of TV where no one is safe (I'm talking about YOU Game of Thrones and The Walking Dead) it's refreshing to watch some old-fashioned entertainment. I think this is why Disney has done so well by the MCU and Star Wars. There's a formula, but it works. It's crowd pleasing stuff in a world of uncertainty, on and off the screen. There's something comforting about that.

Another solid episode, and another Good from me.