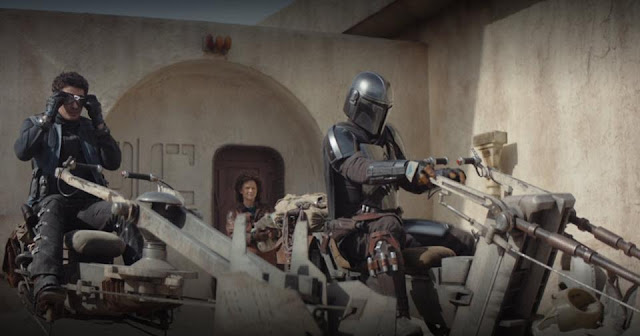 The Mandalorian stalls a wee bit with this latest entry, subtitled The Gunslinger, but that isn't to say it's not a solid entry in what has quickly become the most in-demand TV show in the world. This should surprise no one though, as who didn't think a Star Wars TV series wouldn't play like gangbusters?

Although there's little in this episode to move the series forward, it does pay fans an amazing amount of service by making a pit stop at the most iconic planet in the Star Wars universe: Tatooine! That's right -- motherf--king Tatooine!

There are several moments in The Gunslinger where I had to pause the show, get up, and walk around, therefore relieving myself of some fanboy excitement. Some might balk at an episode that revisits the familiar, especially when so much of The Mandalorian has explored the unknown of the Star Wars universe. But, as long as they don't do it too often, this fan liked it just fine.

So, we hang out at Mos Eisley and that iconic bar. We even have a quick sit in Han Solo's favourite booth. And yes, there's Tusken Raiders, a Dewback, and a speeder-bike ride across the Dune Sea. And a mention of Begger's Canyon. It becomes a lot to digest in the best possible way.

As for the story? The Mandalorian aids a novice bounty hunter in going after a high-value target. There's some shooting, a double cross (spoiler alert) and many Western tropes, but we've already established I'm OK with that too.

We're left with a bit of cliffhanger, and The Mandalorian and "Baby Yoda" still on the run. The whole galaxy is after them, and I'm sure we've got a lot more thrills ahead in the season's final three episodes. Chalk this one up as another Good!