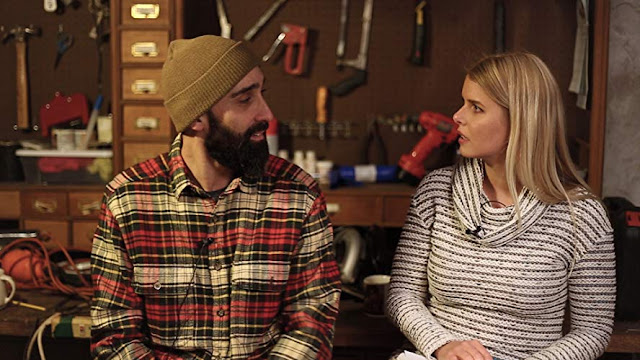 How do you make a tired concept new again? That's a question we put to filmmakers Anna Stromberg and Burt Grinstead when we interviewed them about their new movie The Lost Footage of Leah Sullivan -- a film that lets us know from the get go something bad happened to its main character, and takes us on that ill-fated journey with her.

You'll have to listen to the interview to hear what they had to say about it, but I'm here to tell you this is one found-footage movie that's worth your time, when so many aren't.

I will say the film is successful because we quickly grow to like and care about Leah Sullivan, who is well played by Stromberg. She's a super likeable presence, and has a great chemistry with, well, pretty much everyone. If we hadn't of liked her, this movie wouldn't have worked.

Kudos too to Grinstead, who plays a cop and Leah Sullivan's partner in crime while she makes a documentary about a cold-case murder. The two play off each other well, and seem to be having fun. Their fun is infectious, and we enjoy taking this ride with them, even though we know it ends badly.

But this is a horror film, so the question must be asked: is The Lost Footage of Leah Sullivan scary. Yes and no. It's got some good suspense, and there's a moment toward the end where we realize things are about to go south, and its genuinely eerie. There's a few jump scares as well, but this isn't Blair Witch Project scary, if that's what you're wondering.

It's still an enjoyable time though. My favourite scene is one where Leah interviews a character named Ryan (that's a pic from their scene above). Ryan has a talent for telling stories, and credit must go to actor Matthew Pilieci for delivering a great performance here. He is a master storyteller, and his tales flesh out the plot.

The Lost Footage of Leah Sullivan is a lively excursion into found-footage horror, and I highly recommend it to fans. Seek it out, and enjoy. It's a Good.