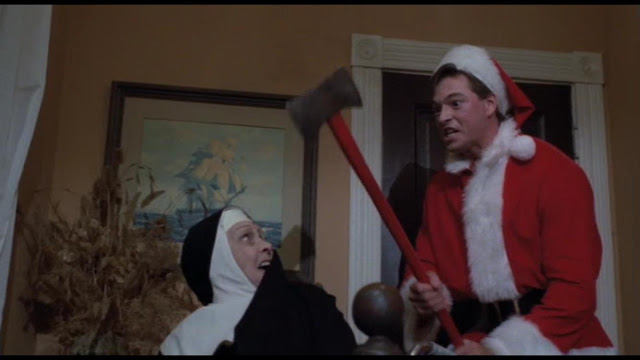 I don't know why I find myself stuck in 1987. At the time, I didn't see it as a particularly big year for genre films. What I didn't know then, I sure know now.

The Silent Night, Deadly Night franchise was a notorious one from my youth. I remember the outrage when the first movie came out. Parent groups hated it for depicting a killer Santa Claus. The movie's not great, but all the fuss made it an eventual box-office hit. So along came a sequel...

Silent Night, Deadly Night Part 2 was also notorious in its day, but not for the killer-Santa angle. The film was largely trashed because it uses about 25 minutes of footage from the first movie for a prolonged flashback sequence which, well, tells the story of the first movie.

If you hadn't seen the first one, that's fine I guess. I have, and found the excessive flashback insulting to my limited intelligence. Really, writer/director/editor Lee Harry? You think Silent Night, Deadly Night is so complex to warrant that level of a retelling? Probably not. He saved a ton of money this way, ensuring a profit off this sequel's limited theatrical release.

The remaining hour of Silent Night, Deadly Night Part 2 is still pretty lame. This one is about the first killer's brother, and tells his reign of terror as he attempts to finish what big bro started. It's played straight, but lead Eric Freeman's performance is so over the top the flick feels like a black comedy. His delivery of the line "Garbage day!" before shooting someone through a garbage can has to be seen to be believed:

OK, I'll come right out and say it; this is a shitty movie! I couldn't even appreciate it on the so-bad-it's-good level. Maybe if it hadn't reused so much footage from the first one? But it did, so it rates an Ugly.