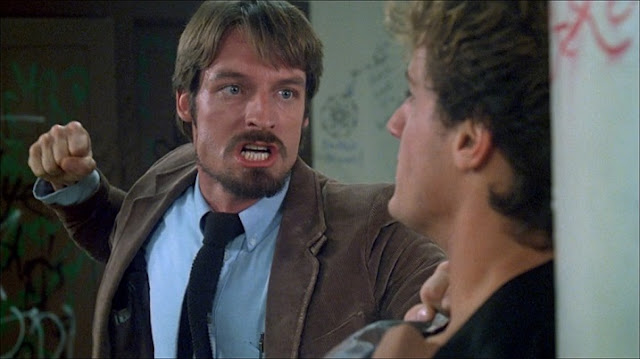 The Class of 1984 is a button pusher of a movie. It makes you mad, and has you yelling at the screen at times, in a good way. Sure, it's a B-grade exploitation movie with a heavy handed message, but it's also a lot of gruesome fun, even if you want to punch your TV.

Why punch the TV? Because you get so frustrated at how Timothy Van Patten's villain gets away with so much, when he's really just a manipulative -- and destructive -- little shit who should have been put in his place as a child. Did screenwriters Tom Holland and John Saxton have something to say about bad parenting? I'm thinking so.

As a result, we get about 90 minutes of Perry King's music teacher trying to reason with, outthink and even outmuscle Van Patten and his gang of hoods, who rule the school through violence and intimidation. In the end, we get a great showdown, where King has to confront Van Patten's gang. Fortunately this pay off is worth the time getting there.

The movie has a solid cast, including the always reliable Roddy McDowell, and a very young Michael J. Fox. Mark Lester's direction is solid, and the film just works. What more can I say? I'm glad good triumphant over punk-ass little shits, and I'm giving it a Good.