On film, movies and The Irishman 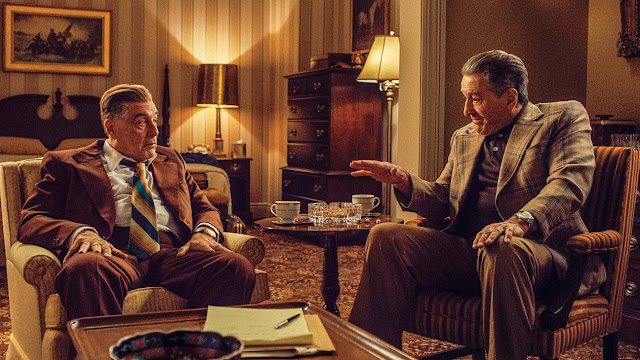 There was a lot of noise made about a month or so ago on what cinema is. The war of words started when acclaimed filmmaker Martin Scorsese said the Marvel Cinematic Universe was not cinema. This caused a "great" debate among... well... pretty much everyone about what makes cinema, if the Marvel movies are cinema, and so forth.

I didn't enter that debate. Our Mike S did, and did so eloquently. But having watched Scorsese's latest, The Irishman, in one marathon sitting, I think everyone missed the point. That's right, you're all wrong! Wanna fight about it? Didn't think so.

I think cinema can be broken down into two forms, and Quentin Tarantino nailed them in the highly underrated True Romance. There's a scene where Christian Slater talks with a movie producer about the difference between movies and film. I'm not going to do Tarantino's great dialogue justice, but to paraphrase; film is the higher art form, and movies are the popcorn entertainment. Both are cinema, they just work on different levels

So, The Godfather is a film. Star Wars is a movie. Jaws? That's a movie. Apocalypse Now? A film. The MCU? Definitely movies. Zodiac? A solid film.

Scorsese makes films. Sure, many appeal to viewers who love movies too, just as Jaws and John Carpenter's Halloween appeal to those who enjoy film. Saving Private Ryan works as entertainment and an exercise in filmmaking, but it's more film than movie.

I'd argue The Irishman is one such film. It's probably the best American film to come out in 20 years, the last being David Fincher's Fight Club. It's something film fans will be talking about for decades to come. You don't rivet eyes to a screen for 3.5 hours and not have a work of brilliance. Robert De Niro, Al Pacino and Joe Pesci haven't been this good in decades. And the film is entertaining enough movie lovers should enjoy it too.

So there. Forget about debating what's cinema and what's not. It's all storytelling and conveying emotion, even if that emotion is wanting to blow stuff up or punch someone in the face. But Tarantino said it best; there are films, and there are movies, and they all have their place.

And if anyone would know, it'd be him.