The Animated Addict: "The Tale of the Princess Kaguya" (2013) 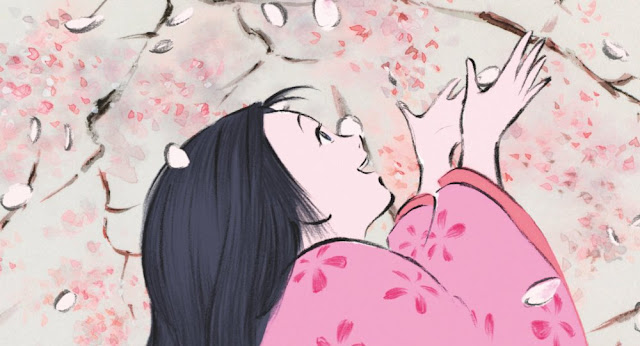 The Animated Addict is back with a new review!  Today, we discuss one of Studio Ghibli's lesser known films- "The Tale of the Princess Kaguya".

A poor bamboo cutter finds a baby girl in the forest.  Taking her home, he and his wife raise her as their own.  As she grows to maturity, she begins to question her origins, and why she's here.

Soon, she must make a choice when strange and marvelous beings come to take her home...

This film is based on a very old Japanese story, and deals with a very mature and serious theme.  It deals with the difficulties of growing up and death.  It's a marvelous way of talking about the topic without being all up in your face.  It's entertaining, and flows smoothly and gently.  You can either think about the themes involved, and get emotionally invested- or you can just sit and watch a simple and relaxing movie.

I enjoyed the characters.  They aren't super deep- but you can see how they reflect certain aspects of our lives and the world around us.  This is helped by the voice acting.  They really brought a nice, soft aura to the characters and the story- while still putting emotion into what they say.

The animation is not the standard style you'd see in a Studio Ghibli film.  It's much simpler, and almost sketched.  I really liked this style.  It allowed me to focus on the story and characters.  It also really fit with the gentle tone of the characters and story.

This is not a film that a family would gather to watch, as it's a bit more mature in nature than what the studio normally produces.  I would recommend it for a single viewer by adults that enjoy anime films though.  It's going to be placed in "The Bad".