Review: The World According to Jeff Goldblum Season 1, Ep. 1 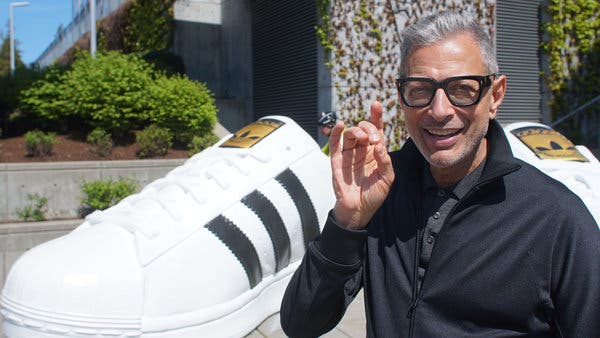 Is there such a thing as too much Jeff Goldblum? Of course not, but the star's new Disney + series The World According to Jeff Goldblum might have you thinking there could be.

I say this as a die hard Jeff Goldblum fan. In my opinion, this series wouldn't work without him. But, if you're not down with Goldblum, his schtick might wear thin by the end of the first instalment.

Fortunately, I was hooked on this episode, which explores everything you'd want to know about sneakers, and found myself smiling -- and even laughing -- with glee despite myself. The point of The World According to Jeff Goldblum is we follow the quirky actor as he explores subjects that interest him. Through the process of examining the mundane, we learn something extraordinary.

Each episode also connects back to Goldblum's childhood, which is where many of these fascination started out. We quickly learn he's probably been the man we've known on screen since his beginnings.

So yes, the premise is thin, but somehow it all works, even when the novelty wears off.

As for sneakers, we learn their origins, and follow their evolution to what is now a science-drive, multi-million dollar industry. Goldblum interviews everyone from ADIDAS engineers to street basketball player, unraveling why sneakers matter so much from a cultural perspective.

Goldblum has a lot of fun and, as a result, so do we... as long as we're on board with Goldblum. I was, and I look forward to seeing his spin on denim, ice cream and tattoos.

I'm giving this debut episode a Good, and encourage fans to check it out.