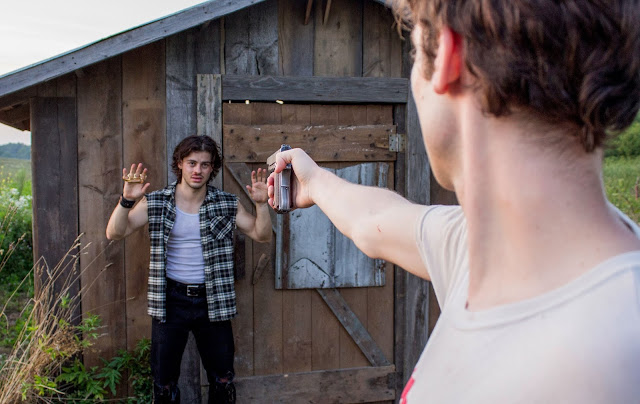 It's been a long time since vampires were scary, but writer/director Frank Sabatella does a fine job of correcting all the bad things Twilight did to the bloodsucking fiends with his new movie The Shed.

In fact, Frank not only makes vampires scary again -- and takes the sexy right out of them -- but he crafts a poignant film about bullying, and how easy it is to travel down a dark road of revenge.

That's the core of The Shed, which asks how far would you go to get back at your tormentors, and would you be willing to become a monster to do it? It's a heavy question, and Frank poses no easy answers. I found myself on both sides of the fence, and not 100-per-cent happy with either position. Well played, sir. Well played!

It helps he assembled a fine cast of young actors. Jay Jay Warren makes us feel for Stan, and portrays the character's dark sadness well. Equally effective is Cody Kostro, who is the bully's target. You get a firm grasp of his rage, and I found myself thinking "Yah, man. Do it!" more than once. I felt like I knew these characters, and have definitely met people like them.

The Shed does a good job of walking the line between emotional drama and entertaining popcorn flick. The movie wouldn't have worked had it swung too much one way or the other. I felt for these kids, and found them relatable, but I also got my gory vampire movie, and appreciated the watch very much.

The Shed is in theatres, and on Digital, and I encourage peeps to check it out. It's a Good.