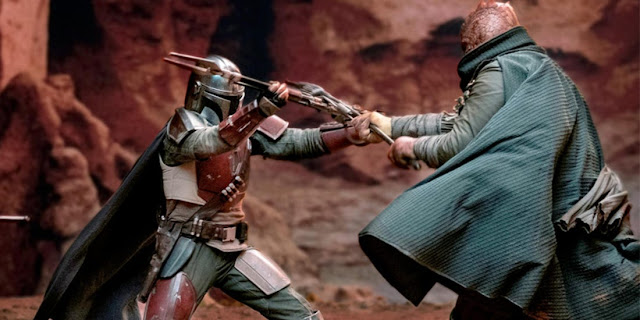 We established The Mandalorian is an excellent entry in the Star Wars canon with Episode 1. Now that I've just finished the second instalment, I can safely say this, the franchise's first foray into live-action television, is probably my favourite Star Wars Thing since Return of the Jedi back in 1983.

That's a pretty bold statement. I know this, and stand by it.

After being left somewhat stunned by the revelation The Mandalorian was sent to retrieve or kill a baby Yoda -- or, I should say, an infant from the species of Yoda, as the race has never officially been named -- Episode 2 finds our hero and his infant "prey" trying to get off planet, which it turns out is Tatooine. I assume this because there's Jawas, and they totally spoil The Mandalorian's plan to return to his employer.

What we get is a fun, and often funny, adventure as The Mandalorian tries to retrieve the parts from his scavenged spacecraft, exploding many Jawas in the process. He then sets out to steal an egg the diminutive scavengers demand as payment for returning what The Mandalorian needs to get off world.

This episode continues to have the vibe of the original Star Wars trilogy. I've begun to enjoy the characters, and find myself rooting for them. This was also the best use of Jawas ever, in my opinion.

The series is doing what I always hoped a Star Wars show would do: expand on the universe fans have grown to know and love, while telling interesting and entertaining stories. So far, mission accomplished! This one's a Good... and now I gotta wait a week for Episode 3...