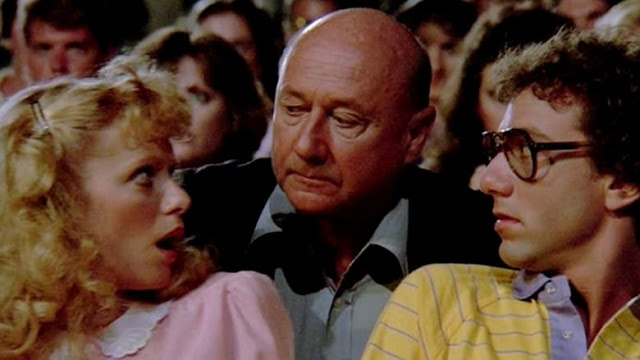 Remember when most long-running TV series would eventually resort to a clip show? Basically it was a lazy excuse to give everyone a week off and tell a story using footage from past episodes.

Well, the 1984 "documentary" Terror in the Aisles is essentially that, only for the horror genre. Someone said, "let's make a horror movie... but using scenes from other horror movies. It'll be cheap, easy, and we can still make a buck even if it bombs."

And that's basically what happened. Donald Pleasance and Nancy Allen probably worked for a day each, and provided material upon which to wrap footage from a few dozen horror, science fiction and crime films around.

Terror in the Aisles is presented as an exploration of the horror genre and its tropes, but it's really just an excuse to watch scenes from Halloween, The Exorcist, Ms. 45, Jaws, Psycho and countless other movies. If you're OK with that, you'll be OK with Terror in the Aisles.

Truth be told, this is for hardcore genre fans only. I'm surprised it got made, and even hit theatres. But it did, and it made a few bucks, so there's definitely an audience for this kind of thing. I being among them.

Still, I'm giving it a Bad, as it's not something to be enjoyed over and over again.