Monday book review: Kings of the Wyld by Nicholas Eames 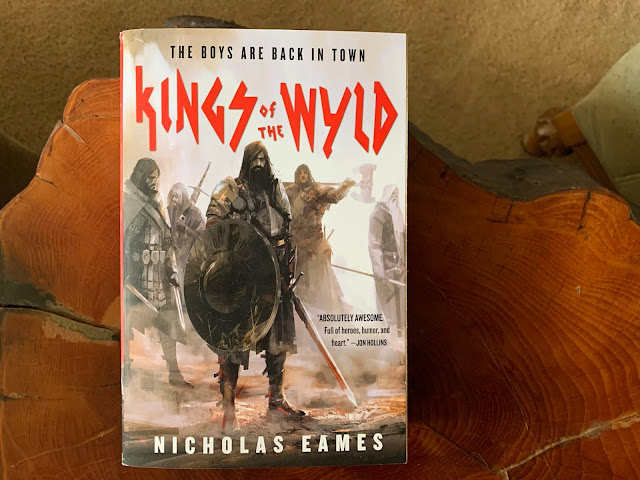 It must be stated, for the record, that I normally don't read fantasy novels. Tried The Hobbit and The Lord of the Rings, tried the Dragonlance and Shannara books, and found them all ducking boring.

But for some reason -- it might have been the cover art, or the tagline on the front -- but I was compelled to pick up Nicholas Eames' Kings of the Wyld. Maybe it's because wild was spelled wyld? I don't know. My brain is a mysterious place...

Let me tell yah, I'm so glad I did. Kings of the Wyld is one of the best books I've ever read. It's so awesome, I was awesomed out by its awesomeness! Yes, it's just that awesome!

The world Eames created is one where mercenary bands are the rock stars of the Middle Ages. Only these bands don't make music, they make war! They go on tours, fight monsters, and rescue fair maidens. They party hard and trash rooms at the inn. They get all the wenches. And yes, they have agents who book their battles for them.

What's it about? A retired group of legendary mercenaries must get the band back together for one more impossible mission... but they're old and well past their prime. Can they get it together and save the day?

Finding out is one of the most fun things I've ever done. Eames' prose is tight, easy to read, and funny as hell. The battle scenes are epic in scale, and well suited for the big screen. The characters are likeable, well realized, and believable. Yes, believable. I know this is fantasy, but if I can relate to who I'm reading about, I'm, going to be invested in the story. Such was the case here.

I mentioned it was funny, right? Because there are a few laugh-out-loud moments here. And I got cases of the feels as well. There's a heavy emphasis on the bond between friends, and how this can win them the day. Oh, and what it's like to grow old, and not be the men you used to be. I dug that. A lot.

Kings of the Wyld kicked my ass in the best possible way. It's a Good, and I encourage anyone who loves a good story to give it a read.