Marcus Flor versus The Quick and the Dead (1995) 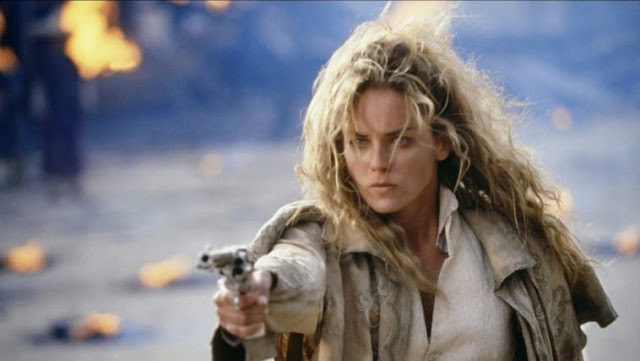 With many mainstream films coming off bland or mediocre these days, watching Sam Raimi's cheesy -- but fun -- Western is a welcome change of pace.

The Quick and the Dead is quite an entertaining and unique gunslinging film. It goes for larger-than-life, comic-book style with its characters, camera work, and story. Each person involved has their own quirk, and each actor is clearly having a blast playing it up.

However, what grabs my attention most is how this movie seemed to pick the wrong protagonist. Sharon Stone isn't a bad actress, but she didn't seem right playing the subtle, female version of the Man with No Name. No, the real star, or stars, are Russell Crowe and Gene Hackman.

Despite them not getting much focus, Crowe and Hackman steal the show. You can see the history the two have between each other, their performances sell it long before the movie tells you. Because of this, you're far more interested in their story, than the story of our main girl Sharon.

Despite the film missing the protagonist bullseye, The Quick and the Dead is a lot of fun. I recommend grabbing a bottle of whisky, some friends, and watching it, 'cause this one's a Good.