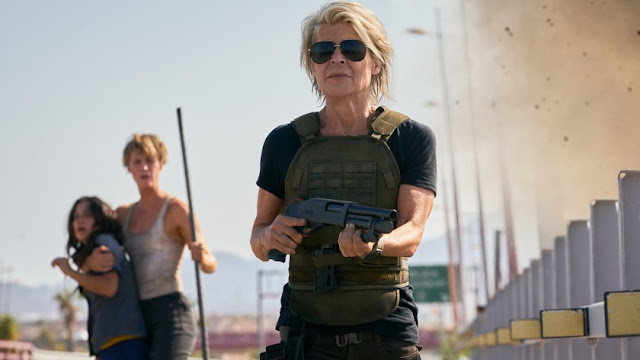 So the much anticipated Terminator: Dark Fate opened to a paltry -- at least by today's standards -- $29 million opening weekend. And, according to The Hollywood Reporter, the film stands to lose Paramount $130 million.

The film cost $185 million to make, and prints and advertising run almost as much, if not more. I once read a movie that cost $150 million needs to earn $700 million worldwide to break even. So Dark Fate's price tag was a lot of money to invest in a film when the previous entry cost almost as much, and didn't break $100 million domestic.

I was surprised when Dark Fate was announced. Few enjoyed Terminator Genisys, and no one was asking for another movie. And the early trailers for Dark Fate didn't do anything to build people's anticipation for it.

Now film journalists are wondering if the franchise is dead. I hope it is. We haven't had a really good Terminator movie since T2, which suggests the idea played out way back in 1991. Not every hit needs a sequel, and not every sequel needs to be franchised, especially once returns start to diminish.

I get it. Movies are expensive and studios want to rely on a brand to draw an audience. But if your brand hasn't been drawing asses to seats, then maybe it's time to stop and move on to something else. Sequels in general aren't performing like they used to, so I suspect audiences are hungry for an original idea, and not the same old same old.

Come up with something new, make it cheap, and earn a profit. Makes sense to me.

But that's just my two bits on the topic.