Catching up with.... 47 Meters Down Uncaged 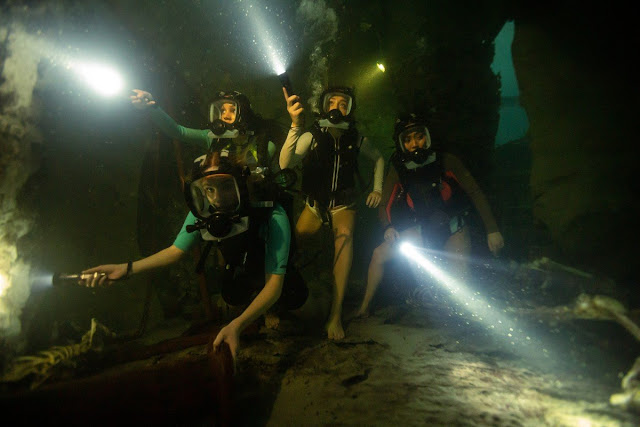 I don't know why I enjoyed 47 Meters Down Uncaged as much as I did. Then again, I really liked the first one, despite my best intentions not do.

Neither film is on the same playing field as Jaws or other superior shark flicks like Deep Blue Sea and Open Water. But on a level of PG-13 exploitation, Johannes Roberts manages to deliver.

This sequel is related to 47 Meters Down in name only. Instead of our hapless -- and hot -- victims being trapped in a cage, they are pursued while cave diving in a sunken city. How sharks got in there doesn't really matter. There are sharks, and they do chomp down on several people through the film's 90-minute running time.

There's a few effective jump scares, the odd moment of suspense, and some light gore. And the cast of young hotties is easy on the eyes. Roberts knows what he's doing, who his audience is (12-year-old boys, and 12-year-old boys trapped in middle-aged men's bodies), and how to deliver the goods.

I also respect Roberts and company made this thing in, and under, the water. The cast is submerged for most of the running time, so making this movie must have been tough! But I'm glad they did, as it adds to the flick's authenticity.

No, this is something I won't watch again, but I regret nothing either. This is good, dumb fun that's worth a single viewing guilt free. So it's a Bad, but I enjoyed my experience none-the-less.