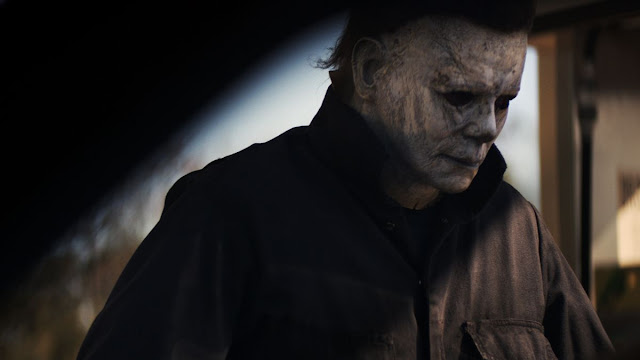 The big day is here- Halloween!  And what better way for me to wrap up this year's month-long celebration of all that's spooky, creepy, and scary than with a review of the latest offering in the "Halloween" franchise?

It's been 40 years since Michael Myers went on his infamous killing spree in Haddenfield.  While being transferred to a new facility, he escapes... and heads straight for Haddenfield.

Laurie Strode has been waiting in terror for the day that Michael would come home.  News of his escape sends her on a dangerous quest to protect those she loves... and leads her to a final showdown with the Boogeyman of her past...

2018's "Halloween" is what I would consider the perfect reboot of this franchise.  While the others in the series were fun, I found the story threads tying them all together started to get silly and rather convoluted.  This instalment goes back to the core concept of what Michael Myers is, and keeps it simple.

Michael has always, in my opinion, worked best when you knew very little about him.  Making him Laurie's brother, and being imbued with supernatural power via the cult of Thorn, blah blah blah weakened the essence of the character.  This movie takes him right back to those basics: he's unstoppable death, pure and simple.

Laurie is a very believable character, and I love the direction they went with her.  She's strong, powerful- but also flawed and vulnerable.  She's afraid- but shows how brave she is by overcoming that fear.  Just a great development for her.

Jamie Lee Curtis as Laurie is simply amazing.  She brings the character to complete life, pulling into the movie.  You cheer for her, not because she's the iconic Laurie Strode, but because she makes this version of the character one you can't help but emotionally invest in at the most basic level.  I'm looking forward to seeing what she accomplishes with Laurie in the next movie.

Nick Castle- who played Myers in the original movie, makes some cameos as the character- his breathing, and a couple of other shots.  Just a great way to honour his contribution over the years.  James Jude Courtney also puts in a solid performance as Myers.  He really brought a nice sense of sinister, unstoppable evil to the character.

The 2018 "Halloween" deserves to be in any fan of the franchise's collection- and watched on Halloween.  It's an absolute "Good"!