Halloween Day by Day: Betrayal at House on the Hill Board Game 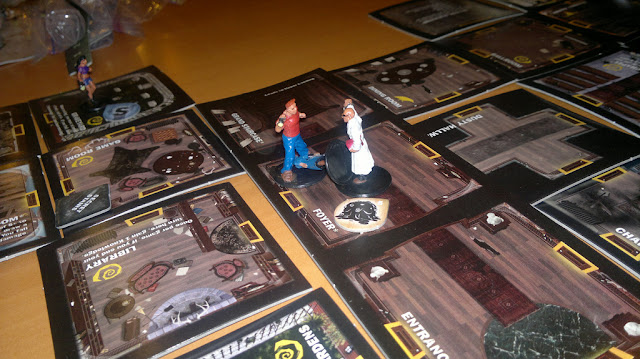 Board games are one of those things that can be enjoyed by pretty much anyone of any age, right?

Halloween is one of those times of the year that can be enjoyed by pretty much anyone of any age, right?

What if you were to combine those two things?

Why, you'd get "Betrayal at House on the Hill" by Avalon Hill, that's what.

You play one of up to six characters exploring a haunted house.  As you explore, you come across items, and events... until someone triggers the "Haunt"... and one of the explorers becomes a horror that the others must escape.

I really enjoyed this game.  I love the fact that each game is different.  From the way the house gets "built" room by room, to which of the 50 different "Haunts" occur, to which person winds up betraying the others.  There is such a lot of replay value to this game.  The average length of game play is about an hour- which is just about right for a game like this.  Long enough to have depth, but not so long as to get tiring or repetitive.

The way the game goes from fully co-op exploration to 1 vs everyone else is a wonderful game mechanic that adds a nice challenge to it, and really forces both sides to think and work as a team in order to win.

While the artwork on the tiles may be a little simplistic, they are perfectly suitable for the mood of the game, and not detract from the instructions on them.  I did like the way the models looked more than the cards, I must confess.  My favorite models would have to be the Professor/Priest (white), and the Little Girl With Teddy (yellow).

So, if you want a versatile game to play with friends and family this Halloween season, give "Betrayal at House on the Hill" a try.  I don't think you'll be disappointed.  It's a "Good" for this game.