Review: Scary Stories to Tell in the Dark 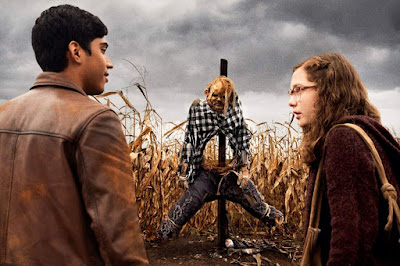 I vaguely remember Alvin Schwartz's Scary Stories to Tell in the Dark appearing in my school library as a kid. I was heading into high school, and more infatuated with girls and action movies than I was horror, so I never really bothered to read them.

But I do remember the controversy surrounding the books, and parent groups trying to have them banned for fear the scary stories and gruesome pictures would corrupt their youth. Yup, people were stupid back then too.

Now we've got a big-budget horror film based on the Scary Stories to Tell in the Dark series from veteran genre maestro Guillermo del Toro and director Andre Ovredal (Trollhunter, The Autopsy of Jane Doe). I'm pretty sure someone will freak out over it too. But the only corrupting the film is going to do is turn young non-horror fans into horror fans.

Like Poltergeist, The Gate or Arachnophobia which came before it, Scary Stories to Tell in the Dark is the perfect gateway horror film for parents to watch with their kids. It's fun, funny, creepy and wonderfully atmospheric. Kids are the heroes here and yes, there's a number of cool -- and frightening -- monsters at its core.

In short, it's got everything you'd want from a horror movie, less a bunch of sex and gore, making it perfect viewing for anyone around 10 years of age and up. And, as a middle-age parent, I still enjoyed what I saw.

Scary Stories to Tell in the Dark reminded me of the first time I saw a horror movie, and I'm pretty sure it will introduce a whole new generation to the genre. I love it for it, and give it a Good.