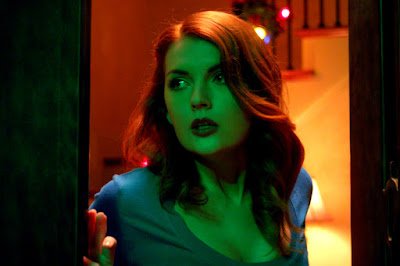 How do I put into words my feelings about the new horror flick The Night Sitter? Other than simply saying I enjoyed the hell out of it?

Well, I guess that's a pretty good place to start...

The Night Sitter is a new Christmastime horror movie from writer/directors Abiel Bruhn and John Rocco It's a fast paced and fun horror flick that reminded me of 80s fright films and the Giallo terror flicks of Dario Argento.

Pretentious much? That's me sometimes.

The combination is a winning one. A pair of boys and their would-be babysitter are at the heart of the action, and I ended up liking all three of them. Bruhn and Rocco take their time building the characters, which we don't get a lot in horror these days. But, when the carnage starts, and the blood begins to flow, you're invested in these people, and this movie.

Gonna sound pretentious again, folks. But I loved the colour palette. Sigh! There, I said it. But the filmmakers use a lot of greens, reds and blues to capture the seasonal feel, which is a stark contrast to the gruesome and creepy things going on. It's a nice, almost dreamlike, effect.

The Night Sitter's best effect is the sitter herself. Elyse DuFour is great, and highly likeable, as the sitter who isn't really a sitter. Spoiler alert. And the camera loves her. I don't think there's a shot in this movie where she isn't gorgeous.

This is a great little horror film, and one that I'll add to my list of movies to watch during the Silly Season. It's a Good, and I highly recommend checking it out.