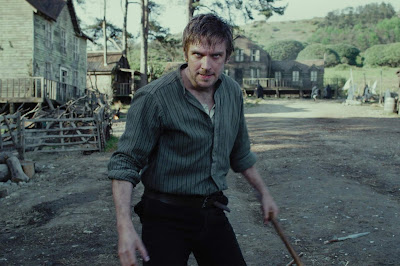 I've wondered what the director of The Raid series, Gareth Evans, has been up to after he'd made two excellent action films...

This lead me to check out his 2018 Netflix original movie Apostle.

I wasn't sure what to expect from the religious, 1905-set horror film, but I was curious. I went in with mixed expectations, and it turned out to be quite a "mixed" experience.

It started off fairly strong, creating a subtle, but tense, mystery around Thomas Richardson (Dan Stevens) as he infiltrates a cult holding his sister for ransom on some far-off island. As he sneaks his way onto the island, we get brought into its strange world.

We see twisted traditions, its oppressive leadership, and we event get a glimpse at the supernatural secret beneath it all. this is also happening while the cult leaders begin to suspect Thomas, and are hunting him. the tone has been set, I'm invested, let's see where this rabbit hole takes us.

That brings us to Act 2. I wasn't sure at first, but something felt off once I hit this part of the movie. It felt less like a story building on its own momentum, and more like a leisurely stroll from scene to scene. The film stopped following its mystery, and Thomas no longer had much to do. We do get some slight development of the character, but it happens more slowly than before. By the mid-point I was getting more and more disappointed by what I was watching.

"Maybe,"I thought," Gareth Evans will do what he's known for at the end, and will fill the last act with brutal, bloody action."

That's sort of what I got.

And that leaves is with Act 3. Suddenly the movie remembers its supposed to be really intense at this point and shit finally hits the fan. People are killed, religious torture is had, and we more or less see the "goddess" these people have been worshipping.

However, this all just suddenly pops up with very little build up. That makes it all feel hollow. they don't even explain the supernatural elements, almost like they forgot they had to. It felt like the movie lost track of all the threads of its story, and haphazardly tried to piece it together at the end.

All in all, I'm left saddened by Apostle. It really did have some promise. I feel a few more drafts of the script, and more time in development, would have helped tremendously. A mediocre movie with decent moments, so it's a Bad.