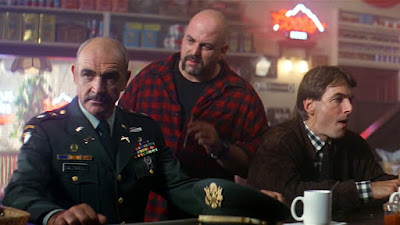 Buddy movies were all the rage in the 80s. They were largely entertaining, and often made buckets of cash on the comedic level (Running Scared, 48 Hours) and as action films (Lethal Weapon, Tango & Cash).

Granted, the more humorous films often had a lot of action, and vice versa.

The Presidio is a long-forgotten buddy movie that marked Mark Harmon's jump from TV to films, and featured Sean Connery hot off his Oscar winning turn in The Untouchables. It failed to make a lot of money, and isn't largely memorable, but it isn't a waste of time either.

For one, Connery and Harmon actually have a pretty good chemistry, despite the fact they're supposed to hate each other. Connery is such an overwhelming presence in every movie he's in, but Harmon still holds his own, despite him not quite being movie-star material.

If you watch this, you'll understand what I mean by that last statement.

I also dug the action. The Presidio was made at a time when action movies didn't need to blow up entire buildings or blocks to be exciting. There's a decent car chase, a foot chase, and a workable final shootout. Plus a brilliant sequence where Connery beats the shit out of someone with his thumb. This needs to be seen to be believed.

What doesn't work is Harmon's romance with Meg Ryan. She's not bad in it, but too much time is spent on their relationship, and it doesn't add anything to the film. In fact, it detracts from the action.

I hadn't watched The Presidio in about 30 years, and I don't regret seeing it again. It's a decent flick, and worth checking out if you dig 80s action movies. A Good.