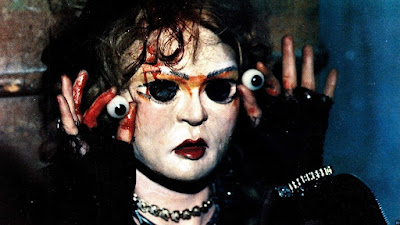 Several weeks back, Shawn and I reviewed a movie called Dolls, which featured a father and daughter having to contend with a trio of evil dolls in their house. It was decent, and had me wanting to check out a flick from my youth called... well... Dolls.

This Dolls came out in 1987, and was directed by Stuart Gordon. Gordon was hot off the success of his first two movies, Re-Animator and From Beyond. Those films were very much about gruesome, balls-to-the-wall fun and horror excess. Dolls, it must be pointed out, is not.

Which doesn't mean it's not fun. It is a lot of fun to watch, only in a slightly more elegant and gothic way than Gordon's first two films. And watch it I did as the flick is available on Amazon Prime, which is becoming a hot bed of 80s movies, if that's your thing.

Anyway, back to Dolls. They just don't make movies like this anymore, even when they call a movie about killer dolls, Dolls. This flick has not three dolls, but dozens, and they stalk a group of stranded motorists with gleeful abandon after a lengthy, but satisfying, set up.

There's gore, sly humour, and the spirit of fun 80s horror films had, but is lacking in our oh-so-serious world of modern horror cinema. You can't take a killer-doll movie too seriously, and Gordon and company did not.

At 78 minutes, this a breezy, undemanding watch, and perfect weekend viewing for us fans of fun, old-school horror. It's a Good, and worth seeing a few times for sure.