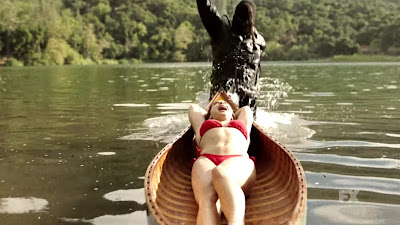 I gave up on American Horror Story a long, long time ago and, much like The Walking Dead, I didn't understand the hype when I did like it.

Hey, a man's entitled to his opinion!

But I might jump back on board for this latest season in the anthology series, dubbed AHS: 1984. You guessed it, the ninth go-around is an homage to 80s slasher flicks, which are all the rage once again... along with the era that inspired them.

Check out this trailer for the new season, which captures the vibe of those old slasher-movie trailers nicely.

One day people will get tired of revisiting the 80s. I grew up in that era, and am enjoying the nostalgia trip for now, even though I didn't particularly like the decade at the time. But it's fun to look back when you're old!