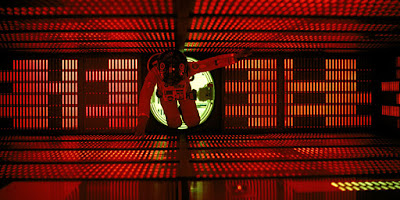 A long time ago, in a Basement not too far away, I gave a review of Stanley Kubrick's "2001: A Space Odyssey".

I give it a bit of a dissing, and placed it in "The Bad".

And the hate flowed through you fans like lightning from a Sith Lord's fingers.

Will you need to prepare your sparkle fingers by the of this reassessment of my views on the movie?

As I stated in my original review, "2001: A Space Odyssey" is a visually stunning film.  Each scene, set, costume, and detail is gorgeous.  The lighting is amazing and stylish.  The models are amazing.  The scale and expansiveness is awe inspiring.

But you can only look at a beautiful painting for so long before you crave some substance to it- you want deeper meaning, thoughts, and insights to be pulled into your mind in order to elevate it to something truly inspiring.

While there is substance to this visual buffet, the mass of it is outweighed and outshone by the visuals.  You're introduced to concepts, but then get distracted by the shiny stuff in the next scene.

While I was watching it, I kept being reminded of the main complaint people had about "Star Trek: The Motion Picture"- the flybys of the Enterprise, the approach to V'Ger, and the flyby of V'Ger were too long, and not necessary.  I couldn't help but feel this way about "2001: A Space Odyssey" as well.  The scenes setting up the idea that you're in zero G on the space plane went on too long (I mean, did we really need to see a guy reading how to use a zero G toilet?).  Ditto for the scene after Dave enters the Monolith at Jupiter.  It's an absolute treat for the eyes (provided you don't mind being pushed to the edge of a strobe induced seizure)... but it went on for almost ten minutes.

The story, and depth of the characters are buried under the weight of the film's beauty and sheer length of it.  This is because the amount of time really spent on the story is significantly less than that spent on the glory of the visuals.  The characters are given perfunctory and shallow depth compared to the intricacy and ballet like movement of the pod leaving the ship to replace a part.

So, yeah.  I'm going to have to stand by my original review of Stanley Kubrick's "2001: A Space Odyssey".  I'd recommend it for a single watch- but it's not a movie I'll return to over and over again as the years pass by.  Once was enough.  It's still going into "The Bad".

Cue the shit storm of hate mail aimed at me...