Review: Into the Dark: They Come Knocking 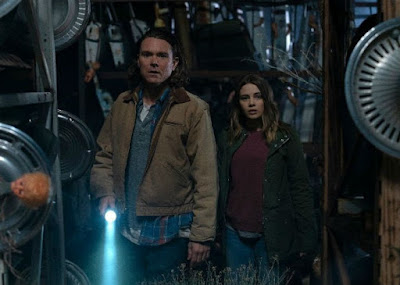 I'm way late to the party when it comes to catching Hulu's horror anthology series Into the Dark. Like nine episodes late, to be exact.

The premise intrigues me: this is a monthly feature that highlights a particular holiday. The first was Halloween, the second Thanksgiving etc, etc. The most recent instalment, They Come Knocking, celebrates Father's Day.

Why'd I bother starting with this episode? I'm a pretty big fan of Clayne Crawford, who is best known for bringing Martin Riggs to life on the Lethal Weapon TV series. He's a talented actor who had the impossible task of following in Mel Gibson's footsteps, and he owned it.

This is his first role since Lethal Weapon, and he does compelling work here as a widower who takes his two daughters on a road trip to scatter his wife's ashes. Naturally, things take a horrific turn. We'd be disappointed if they didn't.

While the horror elements are fine, as director Adam Mason clearly knows what he's doing, and the imagery is effectively spooky, it's the family dynamics that held me. These people are grieving and coming to terms with the loss of a wife and mother, and Crawford and the kids -- well played by Josephine Langford and Lia McHugh -- sell it for all its worth. I believed them, their relationships, and came to like them all quite a bit.

Had I not cared about these characters, none of the horror elements would have worked. But I did, so they did, if that makes sense. I'll give this episode a Good, and I'm now interested in checking out the rest of the series.