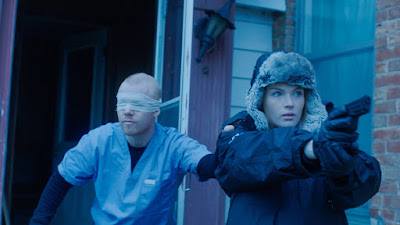 I'm pretty much done with the zombie genre. It's been done to death. We've seen all the tropes. The fast zombies. The slow zombies. The rage zombies. The Shaun of the Dead zombies. Been there, done that.

What we haven't seen is a zombie movie featuring a blind guy and an uber pregnant cop as the main characters, as they try to survive the zombie apocalypse. Well, that is until Deadsight came along.

Deadsight is a low-budget Canadian horror film directed by Jesse Thomas Cook and co-written by one of its stars, the lovely Liv Collins. Although it has almost every zombie-movie trope under the sun, it does have a blind and pregnant pair of heroes surviving the zombie apocalypse. And that's just enough to breathe some new life into this undead genre.

It helps the leads -- Collins, alongside Adam Seybold -- do fine work. I believed Seybold was blind and Collins was pregnant (spoiler alert, she actually was). They bring an intensity and honesty to their roles and, aside from tossing aside weapons after using them once -- ONCE -- they behave smartly, and are generally likeable.

There's plenty of gore, despite the small-ish number of zombies, and the flick has a nice, apocalyptic feel to it. The pacing might be a bit slow, but this isn't a sluggish movie either. Cook was just taking his time to build the characters and the world.

I dug Deadsight enough that I'll probably see it again, and would recommend it as well. That means it's a Good, and I hope it finds its audience when it hits DVD and VOD July 2.