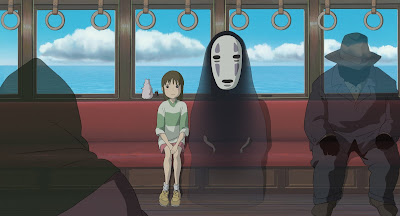 Mike S here with a quick review of a Studio Ghibli classic by the master Hayao Miyazaki, "Spirited Away"...

Chihiro and her parents are moving to a new town.  While en route, they come across a mysterious tunnel that leads to an abandoned train station.  Exploring further, they find a quiet, empty town... and unusually quite... empty town.

As the sun sets, Chihiro finds herself in a world of spirits, witches, and danger as her parents disappear.  Can she save her parents and return to the human world before they trapped forever?


It goes without saying that this is a marvelous film- one that upholds the reputation that Studio Ghibli has for engrossing story telling, engaging characters, and wonderous animation.

The story flows smoothly, and balances humour, seriousness, and action with skill.  I lost myself in the events unfolding before me, and found myself carried along eagerly from beginning to end.  It's a story that respects both the younger viewers and the older ones equally.  It's smart, and understands that its audience is smart as well.

In addition to the smart storytelling, are great characters.  They aren't dumbed down in order to be easily digested.  They are cleverly crafted, naturally engaging, and emotionally detailed.  They aren't treated like they're two dimensional creations.  They have facets that add colour and depth to their personalities.  Even the antagonistic witch shows moments where you realize that while she may not be a great person, she's not entirely evil either.  Each character is unique, but mesh into the story and world seamlessly and organically.

As per usual, Studio Ghibli presents us with a beautifully animated film.  The shots of the bath house especially are simply gorgeous to behold.  The character designs are marvelous, and really match the personalities of the characters.  If you ever get the chance, check out Adam Savage's cosplay of No-Face.  The whole film is a visual treat.

The voice acting is great as well.  There aren't a lot of names I'm all that familiar with, but they did a fantastic job.  Special credit to Daveigh Chase in the role of Chihiro; and Suzanne Pleshette as Yubaba.  They really tied the movie together beautifully with their characters.

If you ever get the chance to watch "Spirited Away"- do so.  You won't regret it.  I didn't... in fact I even added it to my personal library.  It's sits solidly in "The Good".