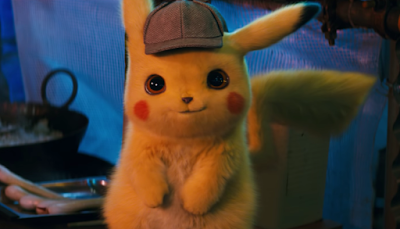 It's easy to tell Hollywood was still in fear of Avengers: Endgame when planning its early May release schedule, as two out of the three new movies hitting theatres this weekend feel like filler.

That means only Pokemon Detective Pikachu has a hope in hell of making any real money, and even then, that's only among the youth.

Jason, Shawn and Howie will sound off on the weekend's new movies, and provide a new interview for your ear holes, when From The Basement storms the Radio NL 610 AM Morning Show at about 7:40.

The interview? Jay spoke with screenwriter Jamie Nash earlier this week, and talked his collaborations with The Blair Witch Project director Eduardo Sanchez. How did this young writer become the man behind such festival faves as Altered, Seventh Moon, Lovely Molly and Exists? Tune in!

As for what to watch this weekend: the voice of Ryan Reynolds headlines Pokemon Detective Pikachu, Rebel Wilson and Anne Hathaway are con women in The Hustle, and Diane Keaton directs the cheerleader comedy Poms.

Is your body ready for this? Tune in via the 610 AM dial, or hit play on the player to your right, and enjoy.