Terror in the Skies, Rim of the World, and Godzilla: King of the Monsters 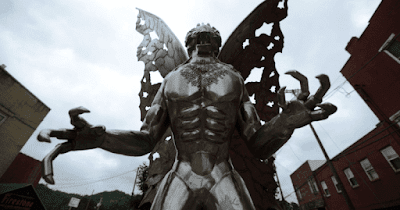 Up from the depth, 30 stories tall, he breathes fire, and is king of them all...

That's right, bitches: there's a new Godzilla movie out this weekend, and that's a reason to celebrate! And Jason and Shawn intend to do just that as From The Basement returns with a new extended cut podcast that will surely pleasure your ear holes!

Not only do you get this morning's Radio NL segment, where Jason, Shawn and Howie talk Godzilla: King of the Monsters, Rocketman and Ma -- not to mention trash Trump, select Chris Pine as the man who should play Ozzie in the inevitable biopic, and rundown what to watch on TV this week -- but you get a slew of reviews as well.

Shawn's seen Netflix's latest, the alien invasion flick Rim of the World, and Jay's watched the creepy kid flick The Prodigy. What'd they think? Stick with us!

And stick around, as The Basement Boys catch the latest Small Town Monsters documentary Terror in the Skies, which is about Mothman and other winged creature sightings in the heartland of America. Is it good stuff? They'll let you know.

Naturally that's not all that goes down the episode, but you'll have to push play and tune in to hear it. So do so... right now!

We'll be back June 14 with a new episode.