Review: What We Do in the Shadows Season 1 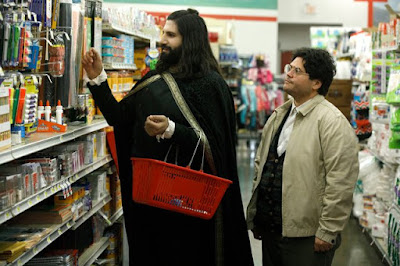 I know, I know. I'm a little late to the party on this one, as What We Do in the Shadows premiered back in late March. But I was able to binge the shit out of the first six episodes the other night, thereby catching up with Episode 7, which airs tonight.

And my viewing came hot off the news the show has been renewed for a second season. So there! Nya nya nya!

Now that I'm done being juvenile, this is a fantastic update of Taika Waititi and Jemaine Clement's hilarious 2014 vampire comedy What We Do in the Shadows. The series is basically the same plot as the movie, only now taking place in Staten Island instead of a small New Zealand town, and with three new vampires. Yes, the documentary approach remains, which is awesome, as that's where quite a bit of the humour comes from.

Waititi and Clement, who remain on board as writers and producers (Waititi also directs the pilot), introduce a new kind of vampire, one that feeds off people's emotions, and will likely remind you of at least one or more co-workers and/or friends. He's a low-key character, and very funny. Ditto Harvey Guillen's familiar Guillermo, who would do anything to become a vampire.

This is a perfect example of how TV has become a better storytelling medium than film. As great as the movie is, What We Do in the Shadows the series is able to take more time developing the vampire world, their culture, and characters. This means more jokes and a broader spectrum of comedy.

What We Do in the Shadows is essentially a bigger, badder and more darkly humorous take on the movie. It's a great horror comedy that is probably the best show I've seen this year, and I dig me the hell out of The Punisher Season 2 and Santa Clarita Diet Season 3. If you get the chance, catch up with it right away.