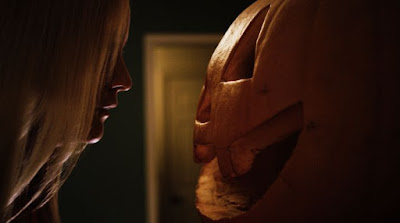 Possession films, like any horror subgenera, have their tropes. Go into a vampire movie and you know what you're gonna get. Ditto zombies, slashers, and yes, movies about people being possessed.

So does the upcoming Possession Diaries bring anything new to the table? Or are we getting more of the same old thing? Take a look at the preview before we continue.

Yes, there isn't a lot new in Possession Diaries. However, that doesn't make it a bore. We do get a lot of things we've seen before. And, in many cases, they've been done better. But the flick has its positive attributes.

What I liked: leading lady Katherine Munroe owns this movie. It's basically a one-woman show, and she kills it, which is great given it's her first lead role. There's also a few effective scares, including a hand out of a jack-o-lantern that I quite liked. Veteran actor James Russo is damn intense as Father Brien. And, despite how it might look in the preview, this isn't a found-footage movie. You get some cam stuff, but a lot of traditional filmmaking as well.

What I didn't like: some of the writing/dialogue is pretty sloppy, to the point of being cringe worthy. The Devil sounds like Dr. Claw from Inspector Gadget. And why does he keep phoning Rebecca when he can attack her in her room at any time? Also, Johnny Ortiz, who plays Munroe's Mexican boyfriend, is one of the worst actors I've ever seen in any movie ever. He shouldn't be allowed near a film set ever again.

All in all, this is a decent enough time waster. I didn't love it, but I certainly didn't hate it. It's worth seeing because Katherine Munroe owns it. But it's a Bad for me.

For the record: Shawn agreed with me on many points, but enjoyed the film a lot more, saying it is one of the better low-budget flicks we've reviewed on the show. He gave it a Good.